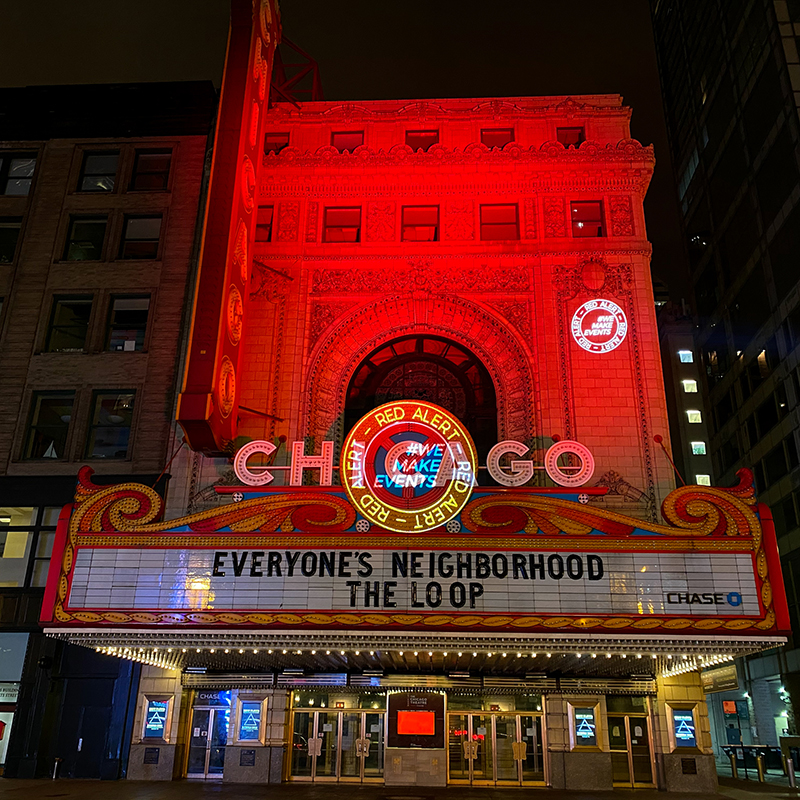 The live event industry came together for a gig. Competitors unlocked their warehouses and dusted off gear, and crews were created with volunteers. Nobody got paid. But if the #RedAlertRESTART event on Sept. 1 did its job, money could be coming in, in the form of government assistance to all those companies and individuals in the industry who are financially suffering from the Covid-19 pandemic. It will take continued efforts to urge Congress to vote to pass the expanded unemployment benefit legislation.

#WeMakeEvents is behind the efforts. On a happy hour Zoom call, Marcel Fairbairn and others discussed how the UK’s live event industry lit more than 700 buildings in red light to point out the plight to its lawmakers. Why not follow that example in the U.S.? It would further enhance the efforts of industry leader Michael Strickland as well.

For an inside look and more legislative details, visit www.plsn.me/MF-Red and www.wemakeevents.org.

In this case, the red light was designed to make a sound. Fairbairn says. “We wanted a voice for our forgotten industry. We wanted to do something meaningful, and be heard. We did – and we were.”

While the color red was chosen to visually “sound the alarm,” some regional directors told Designer Watch they were turned away by city officials in this turbulent election year when colors denote political party affiliations. But overall the event was a success. On Sept. 1 alone, #WeMakeEvents reached 1.5 million on social media; had 45,000 website visits with 9,500 letters sent directly through it to Congress; and an estimated 10,000 individuals and companies were directly involved in lighting structures.

Along with national and local news coverage, and social media exploding with red photo postings, Fairbairn says, “We know – because we’ve seen it – the politicians we targeted to get RESTART passed have heard us, they know who we are, and that we will no longer sit quietly while other businesses are back open, or receiving all of the focus while we remain sidelined.”

Designer Watch checked in on some major cities across the U.S. for their red night results. While #WemakeEvents wishes to thank everyone involved, their mantra is to keep company names and brands out of the spotlight. As one committee member says, “Everyone pitched in to help and we’re all in this together. This is not marketing; this is one voice united for a cause.”

Now let’s do some virtual traveling. 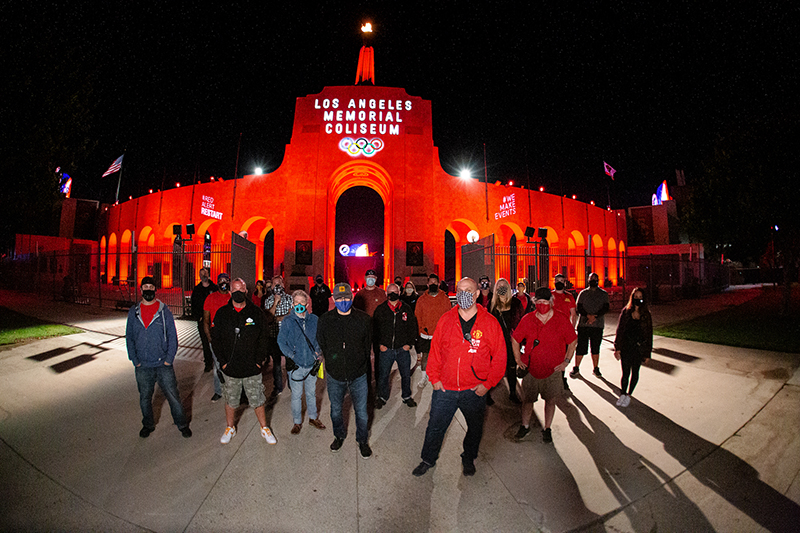 “Jeff Ravitz, Chris Gratton, Stuart Ross, Bud Horowitz and many others volunteered their time and talent for this amazing project. The whole day we were laughing and joking,” says Whalen. “It brought hope and smiles that we were back doing what we loved. I kept saying ‘I forgot where I put all my production equipment, took me three days to find and pack for this.’ This became the theme. We all were glad to be out of the house, moving and touching gear. When the sunset and the buildings began to glow red, it became tough to hold back emotions that many of us had buried since the start of the pandemic. The one thing in common: we all donated our time, our brains, our equipment to unite and send our message loud and clear. We love our industry and we need help! I have never been on a project where there was this much love and feeling we all belonged here in this spot at this time.” 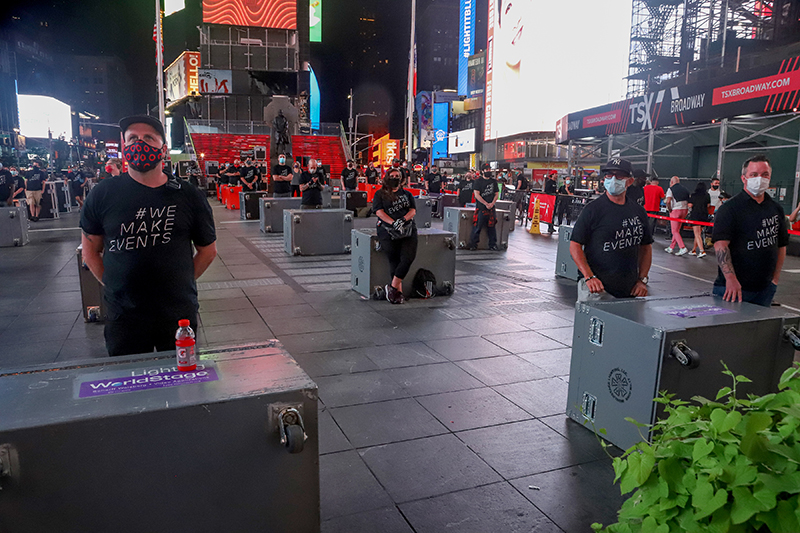 But the activation of Times Square made a more compelling visual, in which 172 road cases from local companies manned by about 200 unemployed industry crew illustrated the shutdown event industry. While the city couldn’t provide a permit of assembly because of Covid-19 gathering restrictions, they did give permission to “freely protest,” Guminski says.

The New York Police Department understood the meaning of the event. Dressed in NYPD blues rather than riot gear, they kept people out of the road case activation area. “It was nice solidarity from the NYPD,” Guminski says. “We didn’t have stragglers walking through. We loaded in and they kept the area roped off. We also got a Times Square billboard for 10 minutes where we were able to show a graphic image about RESTART. Load in at 6 pm, went live on the Facebook livestream at 9 pm, and by 10:15 pm we were loaded out. It felt funny because it felt like a load-in. We had people pushing cases. It was beautiful: ‘Ah, I’m loading in a show.’ ”

He adds, “The activations show what our industry can do. It is cliché but in our industry we are taught that if we are doing our job right, you don’t see us. But it is time for us to come out of the shadows and be seen.” 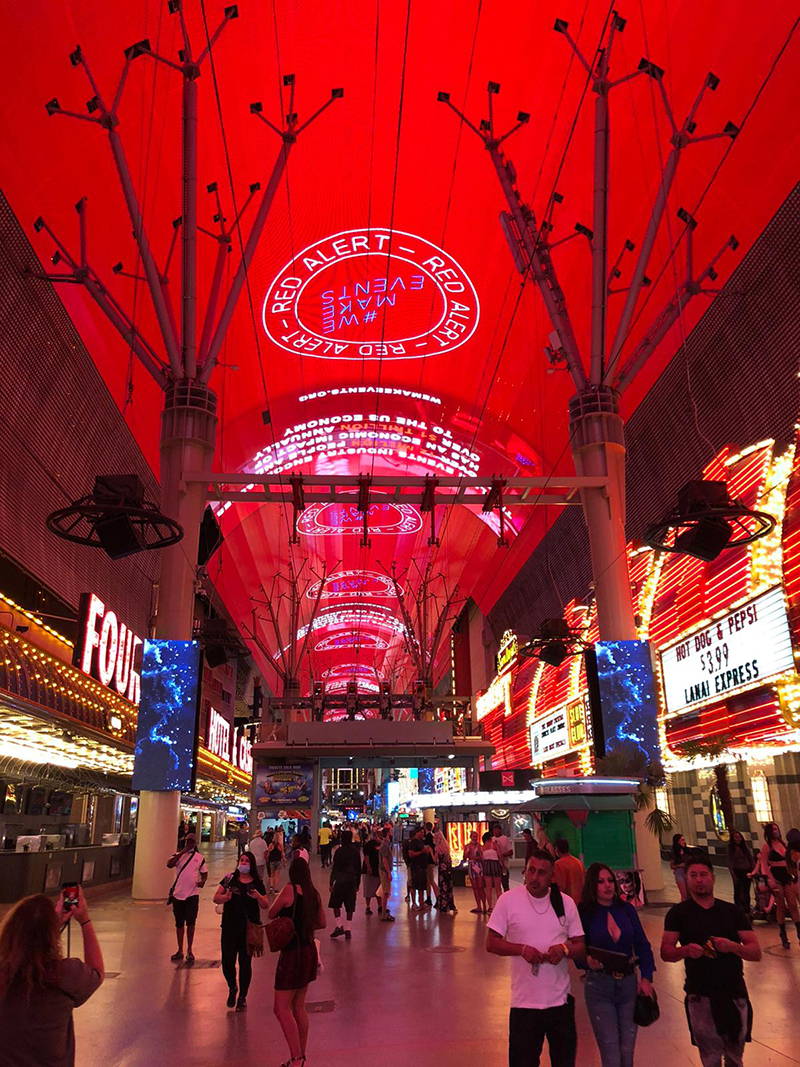 Vickie Claiborne had already been organizing an attention-getting walk, called WE WALK for Events and Entertainment in Las Vegas, when the #WeMakeEvents National Committee member Andrew Gumper asked her to join the Vegas RedAlert team.

“We had access to just about any gear we wanted from almost every vendor in town,” Claiborne says. “Folks came forward with leads on everything from generators to boom lifts. Our network reached out to every corner of the city, and we had the support of the local IA 720 and the Musicians Union. Everyone from the 68,000 people in Las Vegas who have lost their livelihoods have volunteered time, equipment and money to support us.”

While casinos on the Strip declined to participate, the Plaza Hotel & Casino gave them the green light to go, and a pyro/laser show was planned, along with performances from stage and acrobatic performers who had also lost their livelihoods.

Professional stage managers Erica Santucci and Marci Skolnick handled celebrity PSAs and the press. Santucci even managed to get Myron Martin, the CEO/President of the Smith Center on board for the Truss Garden, which featured 68 pieces of truss, each representing 1,000 out-of-work event professionals in Vegas. Agreeing to add a road case push to illustrate the message, Martin himself pushed Case #1 for the entire time.

Other highlights included the Fremont Street Experience, the Thomas & Mack Center, a red fireworks display and a vehicle parade allowing participants to join in while maintaining social distancing. What happened in Vegas didn’t stay in Vegas: the event hit the jackpot in a wealth of media coverage.

“We thought that it would be silly to sit in one place for four hours that honestly no one would be, the tourist areas of Chicago are shutdown due to pandemic and looting,” Jibson says. “So we created a team and devised a plan to put together a mobile rig and make 11 stops along the way! Carrying six wash lights, two spots and a generator, we hit The Metro, The Vic Theatre, the Athenaeum Theatre, The Biograph Theatre, Lincoln Hall, The Merchandise Mart, the historic Chicago Theatre, Wintrust Arena, Soldier Field and wrapped up at the Prudential Building at the head of Grant Park. Woof. What a night!”

The old SunTrust Tower in Orlando. Photo by Scott Bowman

Orlando
LD Cosmo Wilson got the ball rolling in Orlando. But when the World Trade Center’s “Tribute In Light” Memorial, previously canceled, was back on for Sept. 11, he flew to New York and handed the regional director reins to Lyn Henderson, CMP.

As a certified meeting planner, out of work since mid-March, Henderson had a vested interest in drawing attention to the plight of the industry. She filled her vision board with photos of her targets, formed a core team with Joe Lapchick, Jesse Durlin, Jim Hobart and Scott Bowman, and after two weeks of 14-hour days, got 40 buildings lit.

Declaring it the best and most meaningful event she’s ever worked, Henderson adds, “I hope to continue this advocacy, until the RESTART Bill is passed (written by Sen. Bennett of Colorado), and all our peeps have financial relief and get their jobs back, or new ones in the live entertainment field. It’s my mission!” 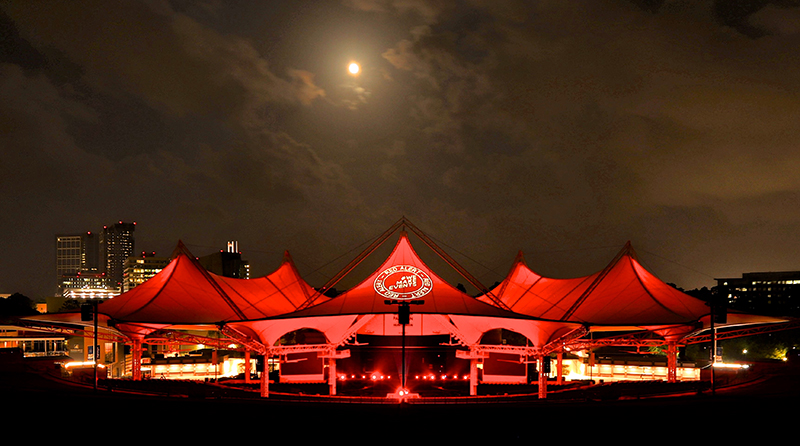 Cynthia Woods Mitchell Pavilion in the Woodlands outside Houston. Photo by Hunter Jones. 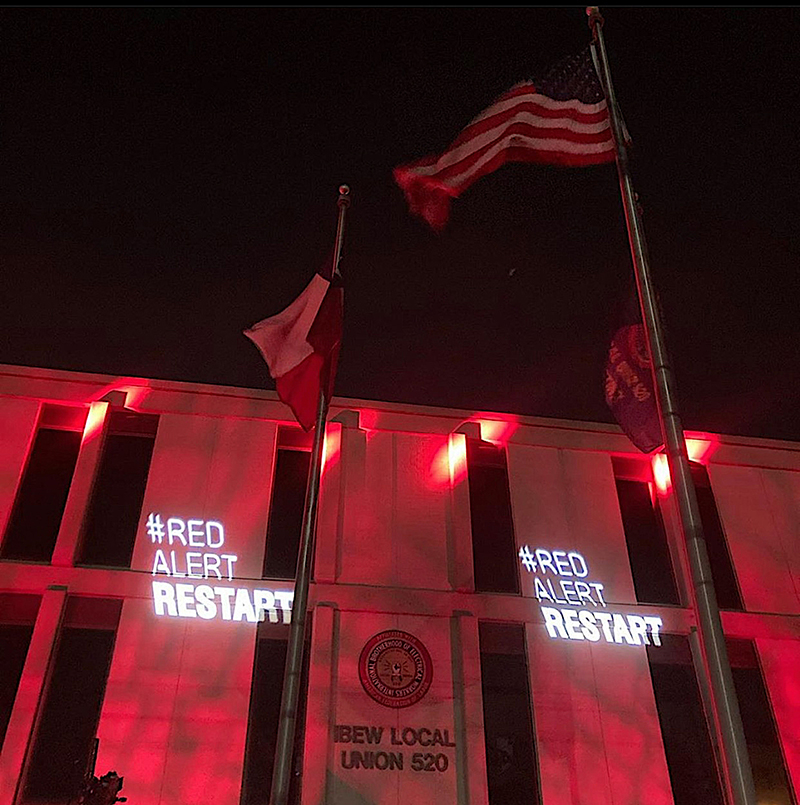 Regional Director Zach Boswell had a long list of clubs like Stubb’s, and musical venues such as The Long Center for the Performing Arts and the Paramount Theatre that he wanted to wash in red light.

While he got no support from the city officials on a host of other structures – odd, because it does declare itself the Live Music Capital of the World – he still managed to make a statement. Of his 35 volunteers, he was humbled by two who were former full-time workers he had furloughed this summer. Even competitors in the lighting world came together for the common cause. Because Texas is a right-to-work state, he’s not legally required to work with IATSE, but the local #205 was “crucial” in lighting the Paramount and the Long Center. Even cultural heroes Willie Nelson and Stevie Ray Vaughan – in statue form – got special treatment as well.

“It felt good to lead a charge,” Boswell admits. “I have been in a mentally dark space and this lifted me up, as I’m sure it did a lot of folks. There is a fog on the other side of this and we can’t see where it ends. We have no time line. This event gave my heart a boost. We’re looking for money from the government but also a bit of hope, and that came across.”

While this physical work was done, the mental work is still to come to get the RESTART Act passed, he adds. He planned a road case push on Sept. 8 to keep the momentum going. “The #WeMakeEvents thing is not over. We have to stay on this. Everyone agreed it is not time to rest on our laurels.”

Bob Harmon and a talented team of Hawaiians lit the world’s most famous battleship, The USS Missouri red along with other venues.